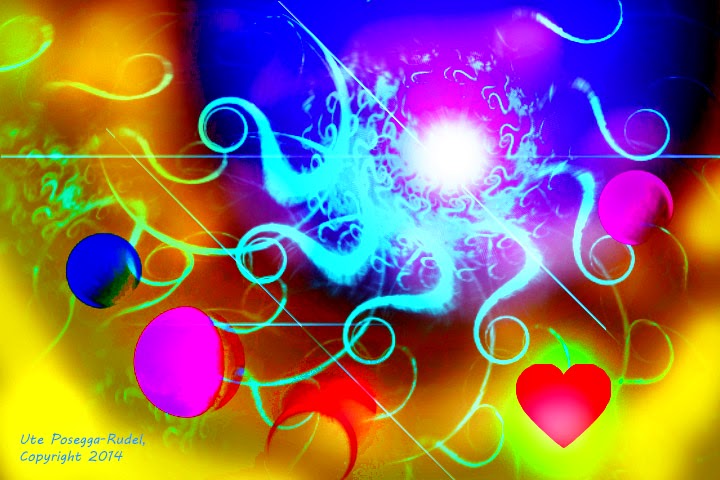 : Today, a brilliant and extremely hot and stingy sun on a blue, very slightly misty sky. Very unusual, because it is November.

After a deep and rather full  morning, I lay on my bed in the afternoon, tired, wanting to sleep.
I fall in a kind of lucid dreaming.

A sudden energetic push, tangibly felt in my back in the heart region, catapults me into another dimension. It did literally a “push”, and I was suddenly somewhere else. In an altered state of consciousness. New rooms of consciousness are opening. The body is involved. The body is flooded with currents of light and new information. As the frequency changes, also the quality of consciousness changes. It is like being pushed into the next higher dimension. There I do not notice “things”, just another form of beingness, currents of new energies and substance.

I have still a body, although it is pure energy. But everything  is different. The old Matrix is not there. There is full heart-freedom in new and refreshing chambers of beingness, and a new higher and deeper octave of experience and expansion as a physical being.

I also know that is is not a personal experience merely, based on just my individual state of spiritual development. These individual spiritual experiences have been so far of a completely different nature. They have nothing to do with the body in itself, although light and energy might be rushing through it which often expands in exquisite sublimity. So I know the difference. Because this here has to do with substance. It has to do with transformation of matter (the body)and the consciousness of it!

So what I experienced and in which I participated, is given to all humanity at this moment. I just know it. It is the new frequency that is here, causing a global shift in consciousness in which the body is involved. And I just was tuning into  this new reality that is happening right now on Beloved Earth Mother Gaia for all.

As I continued in this kind of lucid dreaming (and it is a dream world, the new world)  the desire arises to remain there and not to return to the old world of limitations. I felt ready just to leave, but with my body.

Then I fall deeply asleep. After awakening: there is still the old world. But things seem to happen differently. It is all the same like it was before. But my awareness is different. Now the mysterious space between things is full and obvious, rather predominant. It is Stillness.  Things are secondary and happen within this space randomly -  a phone call, noises, things in the room - they all arise independently within this space that is recognized as real Reality. Nothing complicated, all appears  very simple and natural. It is simply so. There is clarity that the things which are arising – and they are seeming just to pop up in this unified space – are not coherent, but the space is. Basically the things have nothing to do with each other. They only have in common that they arise in this silent space, this substance of which they are a modification of.

Now I understand that the “matrix” we have been locked in for hundertthousands of years, suggests the coherence of all the things. Hence we feel imprisoned, prisoners of things, whereas we are in truth free, as we ARE this space in the first place. It is the infinite Source Field that is our own Consciousness.

The “matrix” is the illusion that we are locked in,  in a closed universe made of things. They seem to build together a prisonlike fabric. And it is all made of mind and the energetic grid of this mind pattern. It is an artifical world. A complicated world, while this from the grid released experience is free to infinity, as things don’t contain us, don’t imprison us. We just observe them as they arise, and they have nothing to do with us. We are eternally free and expanded in unison with the space of primordial substance in which the  things arise.

So I seem to understand now that we will perhaps continue in this matrix world – as long as it still can exist, as the overwhelming majority of mankind is still bound by it through firm belief.

But we, who are aware, are already being released from the bondage to it. The universal new frequencies have already set humanity free. And it is up to each single one to accept in due course - and to tune in to - this new Conscious Awareness.

From this new point of view the old world continues as it will by the choice of the people. We can see what they continue to believe and to do. But they cannot see us, as we ARE, they cannot see what we see.

But we are needed, we are the forerunners of a new consciousness on earth and we are already living in the higher and altered frequencies that carry the new awareness. We are each a cell in the Great One Body of Humanity who  started to alter It.  As such we are initiating a process of substantial change for all the cells, who are the human individuals in the Great Human Body.

How long this process takes, until the last human cell in this vast Human Body is transformed, I don’t know. But it has begun, and this is the most important Happy News we are waiting for.

It would be great to hear from all of you, my beloved brothers and sisters, worldwide, who have now similar experiences! It would  inspire those who started to resignate and to doubt  that the Great Change would ever happen!  And so it would speed up the revolution in consciousness for all humanity! Thank you!

Much love and many blessings!
In lak’ech!
Ute