UPDATE: THE DESTINY OF MANKIND 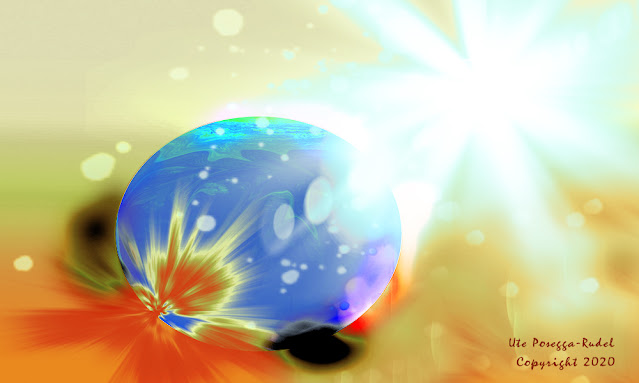 One of these sudden, unexpected impulses that arise in the heart begins to reveal itself, articulating itself at the same time:

"You will see! Something completely new will happen that suddenly turns everything upside down. The Doomsday Prophets did not expect it, they did not perceive it. Because it does not fit into their thought patterns. It is like the ships of Columbus that landed in America, which the native tribe could not see because ships were unknown to them until then. Only the medicine man could."

As these words are being formed, it is as if a new room, flooded with light, is opening up that elevates the heart. When we enter the heart space: does a natural parallel world emerge there, in which to live complies with us, since we do not participate in the artificial world in which humanity is to be  digitalized?

These dark scenarios are suggested to the confused humanity to make them believe in them, not knowing that they are thereby manifesting the world that the ruling elite is planning for them. Most of humanity does not realize that this elite is manipulating them and always selling their plans to them that are presented as already existing facts.

It is up to the people to see through this and to refuse to agree to these plans. Because they must respect our free will, the ruling elite can only enforce on us what we agree with. And they do everything in order to obtain this agreement by all means. The simplest means is fear. To frighten the population with lies and misrepresentations. Whoever is afraid can no longer think independently, loses their autonomy.

And further on there continues  this sublime opening into another radiant space, where the artificially created darkness does not exist. If we choose it consciously and say NO to the insidious plans of the elite, we change the fate of this world.

Our world is a psycho-physical space, it is not "solid" as our material, gross senses would have us believe.
The more of us enter this sublime light space in front of and within our heart, which is the divine world, the more successfully we contribute to the collapse of the last bastion of the false world. This radiant world is free from the invasion of the dark intelligence, that  also deceives us with their false artificial light,  and that has built an artificial matrix within the true, originally divine world. This old artificial world has long since lost its energetic foundation, and is now nothing but a superficial reality without substance, kept alive by the deep sleepers: through their inertia, blindness, attachment to the old, fear, obedience to authority and inability to think independently.

This sublime opening into the true, original and divine world, has not been revealed today to me the first time. It already appeared in April this year (Text/Video: The Emperors NewClothes), but now it seems to become more and more concrete, real and distinct. The short message from above now speaks of the clear sudden possibility of a change of human history. And not only in 30 years. In this liberated space, the madness that has afflicted humanity will not take place!

There will be subtle indications, signs and perhaps events pointing to this sudden happening that could lead to a completely new world. We must be vigilant to recognize them and seize the opportunity, and it is important to recognize it, perceive it and follow it. Maybe we have to give up something that we want to hold on to out of habit ...
But we must ask ourselves seriously: do we want the true divine world, or the shadow world.

It is up to the actions of mankind, how the world continues from then on. And perhaps humanity divides in two parts: One part remaining in the dark world, the other part starting to live in the radiant divine world, according to their choices.

May the gracious things happen soon, that allow the awakening of the still sleeping precious souls within the unconscious masses.

May humanity be spared the great suffering that the ruling elite has planned for it. May humanity finally shake off the yoke and awaken to its true divine greatness and destiny!

♥ Please donate = Energy-Exchange, I need your support so that I can continue with this work,Thank you! ♥
♥ ♥ ♥

"A session with Ute is like coming back to and remembering your truest and deepest essence. It's about becoming one with truth, with reality. Consciously. And the consequences in daily life are amazing. It's a complete shift in awareness and perception of life. "
~B.L. Austria
Posted by Ute Shan'A'Maa Posegga at 4:16:00 AM